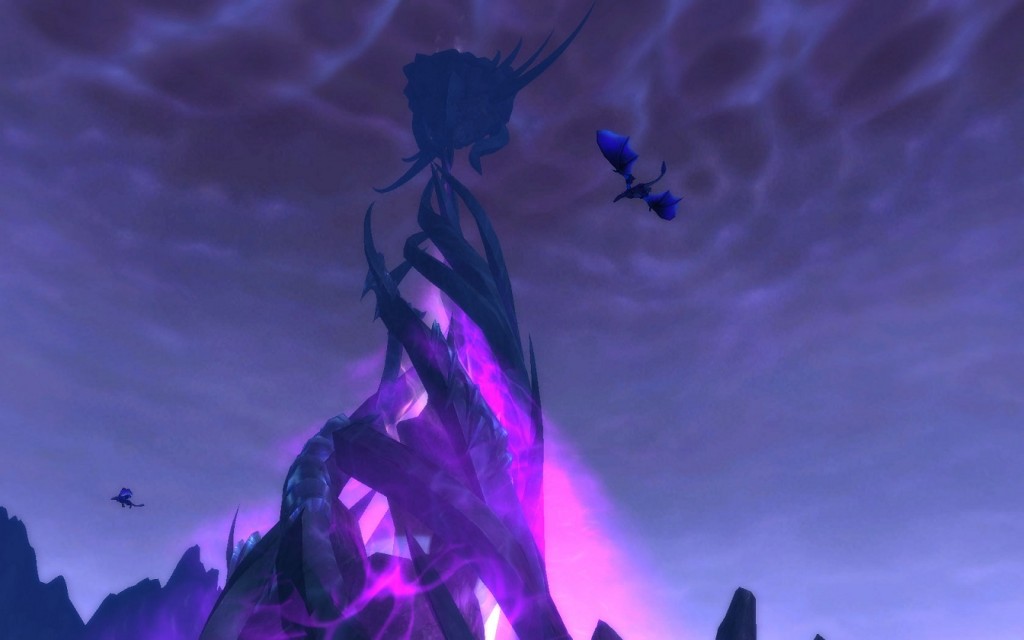 Theralion and Valiona, magically aged to adulthood, were to be paragons among a new clutch of twilight dragons. Instead, they waste their powers bickering and fighting each other. They present a second boss encounter in Bastion of Twilight. Our guide will focus on a 10 man normal version of the fight. They share a health pool and take turns fighting you, one in the air and another on the ground. Valiona’s ground phase is Theralion’s air phase and and vice versa, depending on this they will change their abilities.


Blackout, this will place a debuff on a target that can be dispelled. This debuff absorbs 50k points of healing, when dispelled or when it expires it will explode dealing 210k shadow damage divided amongst players within 8 yards.


Twilight Meteorite, targets a random player with a meteorite that deals 120k damage divided amongst nearby players.

Deep Breath, covers one third of the room in fire, this must be avoided. 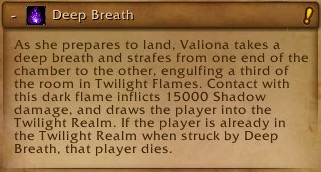 
Fabulous Flames, spawns a circular patch of twilight fire on a random player that deals 12k damage every second.

Engulfing Magic, targets a random spellcaster with increase to their damage and healing done by 100%, each time this player casts he will explode with twilight energy dealing damage to nearby players. 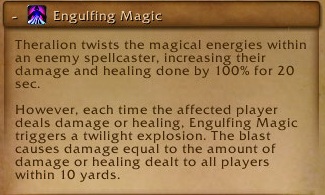 
Twilight Blast, area of effect projectiles that hit all players within 8 yards for 24k damage. This is the reason why you should be spread around the boss

Dazzling Destruction, swirling circles of twilight energy on the ground that transport players into twilight realm if they stand inside them. 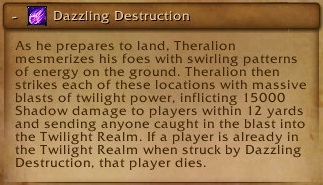 
Tanks: 1
Healers: 2
DPS: 7
Since only one dragon is active at a time you wont need more than one tank for this encounter so ask your offtank to put his DPS shoes on.

This fight is very simple, if you can avoid standing in flames and you can group up and spread out when you are supposed to, these two wont present much of a difficulty for you. There are two repeating phases, one for each dragon. While one of them is on the ground other one will be flying above you. Fight will always start with Valiona on the ground, as soon as she is pulled everyone should spread out to avoid damage from Theralions twilight blast. Soon after, Valiona will cast blackout which means everyone except tank should stack up in order to share damage, once in position remove the debuff and get ready to heal up. Also be prepared to avoid Valionas flame breath, this should not be a problem, standing on her side or behind her should do the trick. Once Valiona is about to fly away Theralion will start casting dazzling destruction, at this point everyone should be prepared to move out of the swirling circles or else they will be consumed by twilight zone. This should not be allowed to happen.

Theralion will land and your tank should be ready to pick him up and turn his back towards the rest of the raid, your melee dps should stack with the tank and ranged dps and healers should stack further away behind Theralion. Ranged dps and healers must stick together from this point and move as one. This will help avoid purple patches on the ground (fabulous flames). One of the players will occasionally be marked with a purple arrow, this indicates that they are about to be hit by a twilight meteorite, another reason to be stacked up. Players that are struck by engulfing magic must stop casting or healing and should move out of their group, once safely away they may continue, this will prevent explosions from hitting rest of the raid. Warlocks and Resto druids may consider standing out of the raid anyway since they cant stop their dots and hots from going off. Before she lands again Valiona will start casting deep breath which means one third of the room is about to be covered in flames, you can easily avoid this by looking at the area she is facing and moving out before she casts. Once she is done she will land and the whole cycle starts over.

Repeat this process until they are dead and be ready to collect your loot (click here for full loot list).
This entry was posted in dungeon, guide, instance and tagged The Bastion of Twilight, Theralion, Valiona. Bookmark the permalink.